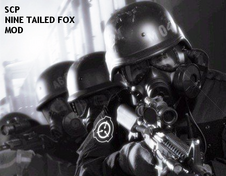 This site is a database dedicated to the Nine Tailed Fox Mod of SCP - Containment Breach. Navigate it to learn about its characters and items. The mod is currently in v0.1.1 and is very buggy/glitchy.

v0.2.0 has been delayed to a summer release.

Here is a set of Categories to navigate the wiki:

Retrieved from "https://ntf.fandom.com/wiki/SCP:_CB_Nine-Tailed_Fox_Wiki?oldid=1115"
Community content is available under CC-BY-SA unless otherwise noted.